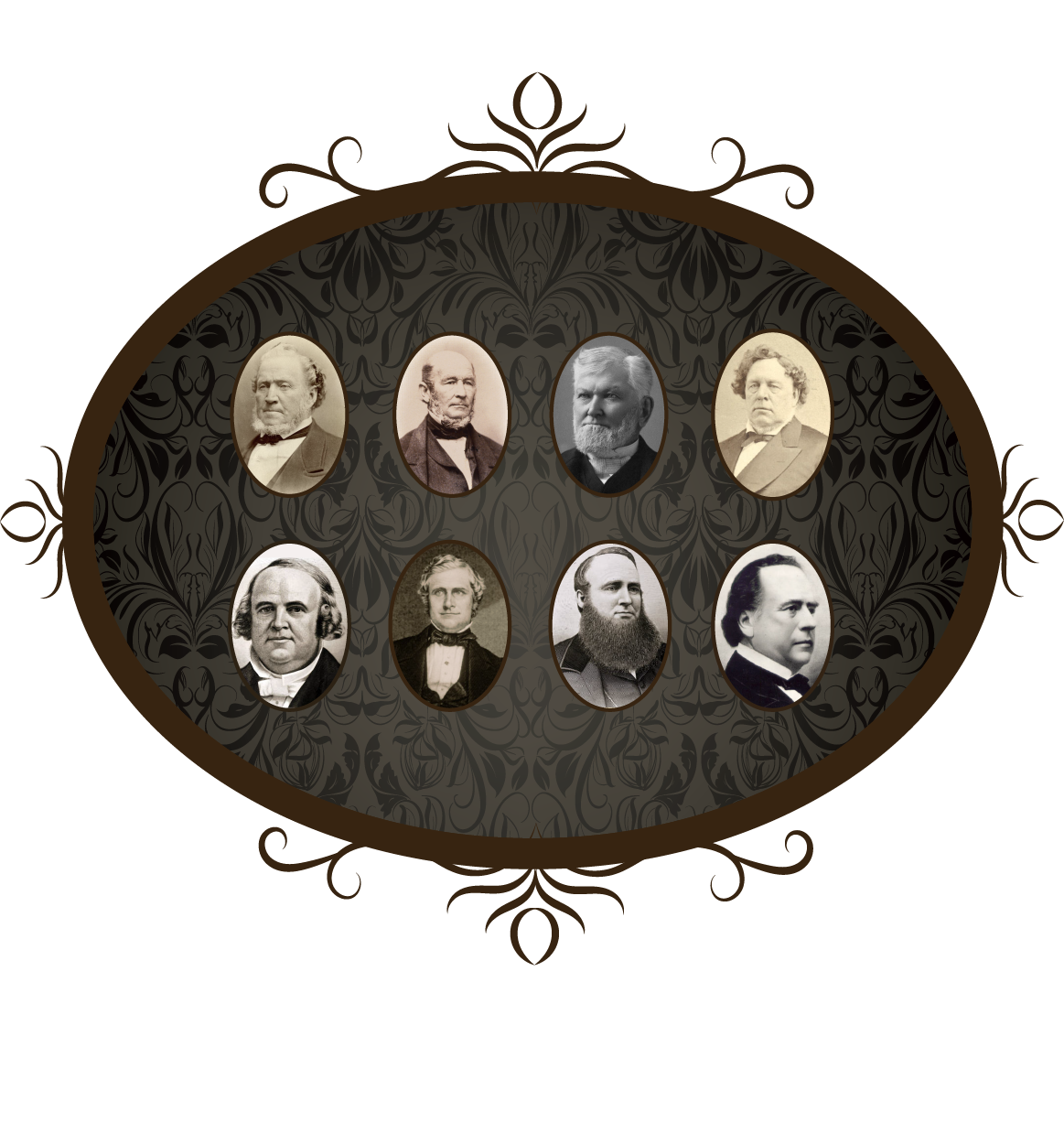 While Meriwether Lewis and William Clark first reached the Pacific Coast of what is now the United States in 1805,1 it was the “Great Emigration of 1843” that opened up westward expansion via the Oregon Trail.2 As a result of exploration by Jim Bridger, Kit Carson, Joseph Walker, Jedidiah Smith, and many others, the more southerly California Trail through the Great Basin was also becoming more popular for migrants. The same year that John O’Sullivan first reportedly used the term “manifest destiny” to describe the westward growth of the United States, Texas became the 28th state of the Union on December 29, 1845. This set the stage for the conflict with Mexico known as the Mexican-American War, declared by President James K. Polk and ratified by Congress in May 1846. By the winter of 1847, the brief war was winding down and the Treaty of Guadalupe Hidalgo was signed on February 2, 1848.

In 1841, there were approximately 165 distinct sovereign political entities in a world of just over one billion people. The president-elect of the United States in January 1841 was William Henry Harrison, and there were 26 states in the growing nation. Writing a single proclamation to an audience this vast and varied would have been a daunting assignment indeed.

On October 31, 1847, President Brigham Young and the rest of the vanguard company to the Great Basin returned to Winter Quarters after a six and a half month round trip journey. While reorganizing the First Presidency had been on President Young’s mind and had been a subject of discussion for some time, the nine members of the Quorum entered into more earnest discussions of the matter over the next several weeks. On December 5, 1847, the First Presidency was reorganized by unanimous decision of the Quorum of the Twelve members present (see D&C 107:28). Church leaders called a conference of the Church to sustain this decision a few days later, but so many people came that there was no building large enough to hold them all. Thus, the conference was postponed until December 24, when a large log structure later named the Kanesville Tabernacle was completed in which to hold the conference. This Proclamation was written prior to the conference and signed the day before the conference began. On the last day of the conference, December 27, 1847, the new First Presidency with Brigham Young as President and Heber C. Kimball and Willard Richards as counselors was sustained by the unanimous decision of the Church then present.3

The only actual signatory on this Epistle is Brigham Young, who signed it “in behalf of the Quorum of the Twelve Apostles.” The other Apostles in Winter Quarters when this epistle was issued were: Heber C. Kimball, Wilford Woodruff, George A. Smith, Willard Richards, Orson Pratt, Amasa Lyman, and Ezra T. Benson. These all had the opportunity to offer suggestions and revisions to the contents of this epistle.4 Elder Orson Hyde was presiding over the British mission. Elders Parley P. Pratt and John Taylor were in the Salt Lake Valley. Elder Lyman Wight was in Texas, having dissented from the leadership of the Quorum in moving the Church west; despite sincere attempts by the rest of the Quorum at reconciliation, he would be excommunicated on December 3, 1848. Since Brigham Young had not officially been sustained as Church President by the membership of the Church yet, this may have been his last publicly issued document as President of the Quorum of the Twelve Apostles.

Nearly the first half of the eight-page epistle recounts what transpired between the time the main body of the Church left Nauvoo in the winter of 1846 and the time that President Young returned from the Salt Lake Valley to Winter Quarters with the vanguard company at the end of October 1847, including some details about the astonishing mustering and generally safe return of the “Mormon Battalion.”5 This historical portion concludes with a lament regarding the failure of the United States government to protect the Saints and their leaders while simultaneously declaring their commitment “to sustain the constitutional institutions of our mother country” and ultimately “petition for a territorial government in the Great Basin” (Epistle, p. 4). The next page of the epistle focuses on detailed instructions of a temporal nature for the safe and immediate gathering of the saints to the Great Basin, in the same vein as similar instructions given by the Prophet Joseph Smith for gathering the saints to Nauvoo.

While not completely setting aside temporal matters, the remainder of the letter contains more spiritual instructions. Local leaders are to read this Epistle in their branches and follow the Spirit in determining how best to help their members gather with the saints. Priesthood officers are to report directly to their quorum leaders wherever they remove to and follow their instructions. Parents are encouraged to teach their children the Gospel, with the support of Church leaders, and encourage learning in all other fields of education. All Church members are warned about apostates and dissenters and exhorted to follow the First Presidency, which is about to be reorganized, and the Quorum of the Twelve. Missionaries are expected to continue preaching the gospel of repentance and inviting all to come unto Zion, which is defined here as “the pure in heart” (see D&C 97:21). All the Saints are admonished to continue caring for the poor and prepare to erect a new temple of the Most High God in the Salt Lake Valley.

The final page of the Epistle conclude with a statement of the Church’s intent to be at peace with all nations and governments of the world in a joint effort “to sustain good and wholesome laws for the protection of virtue and punishment of vice” along with a renewed invitation to “all Presidents, and Emperors, and Kings, and Princes, and Nobles, and Governors, and Rulers, and Judges, and all nations, kindreds, tongues, and people under the whole heavens”6 to assist in building the temple and the Kingdom of God on the earth. While wholeheartedly declaring their loyalty to Jesus Christ and His Gospel and their intent to stand where God had placed them, obey His commandments, and “do the will of our Father who is in heaven,” they also stated a fraternal universal desire to work with all people, “whether [they] be a Presbyterian, or a Methodist, or a Baptist, or a Latter-Day Saint or " Mormon," or a Campbellite, or a Catholic, or Episcopalian, or Mahometan, or even pagan, or any thing else” establishing as a “universal motto”: “Peace with God, and good will to all men” (Epistle, p. 8).

The Quorum of the Twelve demonstrated significant commitment to making sure all Church members could receive copies of the instructions found in the 1847 General Epistle:

The manuscript was handed to Amasa Lyman and Ezra T. Benson, who in company with William I. Appleby, Erastus Snow, James H. Flanigan, and others, left Council Bluffs for the East on December 28, and on January 14, Lyman, Benson, Snow, and Appleby reached St. Louis. Three days later, from St. Louis, Benson and Appleby wrote to Brigham Young that they had “five hundred copies of the Epistle already struck off” and were getting 3,000 printed at a cost of about $30. Appleby had “attended to the printing” and had read the proof; the costs were being paid out of donations from the St. Louis branch. Lyman notes in his journal that the printing was done at the shop of the St. Louis Daily Missouri Republican.

Former Apostle John E. Page, writing in the Strangite newspaper, the Gospel Herald, reported that 1,000 copies of the 1847 Epistle had been printed in Chicago. However, no versions of this republication have been found

Nebraska historian A.R. Mortensen (Nebraska History, December 1965, pp. 266-68) acknowledged the importance of the 1847 Epistle in shifting the focus of the Latter-day Saints gathering to the Salt Lake Valley:

The 1847 Epistle was republished as part of the “Classics in Mormon Thought” series in the July 1971 Ensign, noting its historical significance both as to its timing in conjunction with the reorganization of the First Presidency after an apostolic interregnum of three and a half years, and as part of the series of pastoral letters that Brigham Young issued throughout his ministry:

“The general epistles were pastoral letters relating current events of the Church and direction and counsel from Church leaders...The day after this general Epistle from the Council of the Twelve Apostles was signed, a general conference of the Church was convened on the Iowa side of the Missouri River (Council Bluffs). On the last day of that conference, December 27, 1847, the First Presidency was reorganized with Brigham Young as president and Heber C. Kimball and Willard Richards as counselors.”

The 1847 Epistle exhorts the saints to obtain “a copy of every valuable treatise on education,” primarily “for the benefit of the rising generation” (Epistle, p. 6). Educational historian Frederick Buchanan has acknowledged that “Brigham Young’s personal view of education as a process of learning how to make the Kingdom of God a reality on earth” is a “perception of education” that “has continued to exert an influence on Mormons today.”

While Latter-day Saints hold as a tenet of their faith “that Zion (the New Jerusalem) will be built upon the American continent” (Article of Faith 10), this epistle emphasizes that being “pure in heart” is the key feature of the inhabitants of Zion (see Epistle, p. 7), wherever they may gather. In the Teachings of the Presidents of the Church: Brigham Young manual (1997), the first section in chapter 16, “Building Zion” opens with this quotation from Brigham Young:

Let me say a few words with regard to Zion. We profess to be Zion. If we are the pure in heart we are so, for “Zion is the pure in heart” [see D&C 97:21] (DBY, 118). Where is Zion? Where the organization of the Church of God is. And may it dwell spiritually in every heart; and may we so live as to enjoy the spirit of Zion always! (DBY, 118).

Latter-day Saint historian Andrew Hedges noted that the 1847 Epistle was republished, in full or in part, in several newspapers in the United States, providing news on the condition of the Latter-day Saints and the progress of settlements in the West. One newspaper editor from New York wrote:

If they succeed according to their expectations, the[ir] central position between the Pacific and the Mississippi, their numbers and united prospects will give them an importance, that they have not been able to attain in the United States. . . . The present site of their church, in the midst of mountains on the margin of the great Salt Lake, . . . gives to their present position and enterprise a novelty which will attract hundreds to them

Three handwritten drafts of the 1847 Epistle, including edits on the drafts, are located in the Church History Library. These were likely composed sometime between December 16-22, 1847. The third draft includes President Brigham Young’s signature at the end:
https://catalog.churchofjesuschrist.org/assets?id=62863dd3-f9df-4fde-8b8b-b5c737919529&crate=0&index=1

The 1847 Epistle was originally taken to St. Louis, Missouri (approximately 430 miles southeast of Winter Quarters), where it was published in mid-January 1848:
https://contentdm.lib.byu.edu/digital/collection/NCMP1820-1846/id/17390/
[Note: While the 1847 Epistle was indeed published in St. Louis, the type, typesetting, and format of this version seem identical to the version below that Archive.org asserts was published in Liverpool; these may be the same document.]