Like the college, the campus newspapers name has changed through the years

Each issue includes student publications on various subjects such as domestic science, religion, and local issues. Later editions included photographs of students, faculty, and events. Print editions of the Ricks College/BYU Idaho Scrolls from 1905 to the present have been digitized and are available online.

A version of the current edition is available online at the Scroll’s official website. 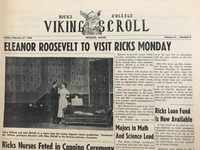 Scroll front page from 1959 featuring a visit from Eleanor Roosevelt